Spring is almost here, and that means some colonies are soon to be warmin' to some swarmin'. Usually when people think of a "swarm of bees," they think of a noisy, sting-y cloud of angry bees turning a picnic into a panic by chasing everyone in sight, and the only remedy is to reach the safety of the nearest building or body of water. But while it is true that any large group of bees can rightly be called a swarm, I'm referring to the spring swarm phenomenon. (By the way, if you have annoyed a colony of bees enough to make them chase you en masse, it is not recommended that you look for a lake to jump into. Bees may have a brain the size of a sesame seed, but they aren't stupid. If you jump into neck-deep water, you not only slow down your escape, but you also effectively present your head as a convenient target for them. The obvious result of that tactic is being stung and wet. It is much better to run straight for the nearest building or vehicle.)

The other, less dramatic kind of swarm is the spring swarm, a behavior that honeybees exhibit in late spring. Once the weather has warmed and enough rain has fallen to provide good foraging for a colony, it may decide to divide and relocate. This is a natural way that bees propagate the species, and can happen for several reasons: starvation, a disease or other problem in the hive, or more often than not, overpopulation. Colonies don't always swarm, and beekeepers take certain steps to prevent it, mainly by adding empty honey supers to an existing hive, thus keeping the bees interested in filling it rather than searching for more preferable locations. Some beekeepers will also clip the wings of their queens, preventing her from flying, thus ensuring that the colony stays where it is - although in my opinion, that practice is both barbarous and unnecessary.

In preparation for a swarm, the workers will rear a new queen, and before she emerges from her cell, up to 2/3 of the colony, along with the present queen, will suck up as much honey as they can before simultaneously leaving the hive. They then will roost in a large group on a nearby tree, fence, building, car, or anything at all, really, while scout workers search the area for a good place to start a new hive. This can sometimes cause an inconvenience and a bit of anxiety to people if the bees happen to decide to choose a house, a car or a lamppost to rest on, but these swarms are not dangerous. Although a group of several thousand bees congregating on your front door is a disconcerting sight, they typically will spend one or two days at most in that location before moving on to their new chosen hive.

How do they choose a new hive to inhabit? Several hundred scouts, which are necessarily experienced foragers, will fly up to several miles in their search for a promising home. According to Thomas Seeley, chairman of the Department of Neurobiology and Behavior at Cornell, an ideal nest site is a tree or other natural cavity with a volume greater than 20 liters, with a south-facing entrance smaller than 30 centimeters a few feet off the ground. Presumably, there must also be an abundance of available flowers nearby, as well. Once a scout has discovered one to her liking, she will return to the swarm and announce her discovery with the familiar "waggle dance," the same language she uses to report the location of a plentiful source of nectar when foraging. Several scouts will find suitable locations, and will each return to the swarm with their report. Scouts will dance more energetically if the site they found is very promising, and the discoverers of less-than-ideal locations will dance less energetically. Scouts that encounter more energetic dancers on the swarm cluster will eventually decide that their location isn't worth arguing for, and stop dancing altogether. Some have even been seen changing their vote to support the more suitable location found by a different worker. In this way, a consensus is finally reached, and the scout with the most excited dance will have her way, and she will then lead the entire swarm to the new hive that she has found. Once the swarm has arrived at their new home, the queen gets settled inside and the workers begin their orientation flights, memorizing nearby landmarks so that they can begin foraging again. The bees must return to work building comb quickly, as the new hive is usually an empty one. 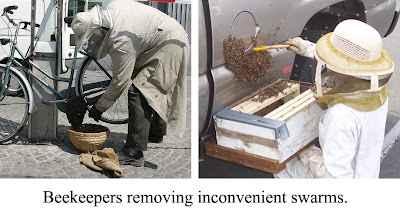 Whether swarms are considered a nuisance or an object of interest (or even terror) to most people, to beekeepers, they are often considered an opportunity. A hive cluster, often comprised of tens of thousands of bees, plus a queen, is a free colony for a beekeeper with an empty hive in their apiary. If a swarm has congregated on a tree limb or other easy-to-reach spot, all a beekeeper needs to do is to suit up and shake or brush the swarm into an empty box, then transport it back to their hive. Everybody wins. The only risk that a beekeeper takes in doing so is that because the swarm is "wild," there is no way of knowing if the bees are diseased. Still, it's a risk that most are willing to take. So if you see a swarm this spring, don't call Pest Control. Try a local beekeeper first. They, and the bees, will be grateful for it.
Posted by Jay at 6:21 PM No comments: