My Adventures in Honey Extraction, or "How I Learned to Stop Worrying and Let Gravity Take Over"


October 9, 2011: Extraction Day! The time had finally come to harvest the honey I had been anticipating for the past year and a half. I left work in a hurry to get out to the apiary before it got too dark to open the hive. The honey frames were nice and heavy, and almost completely full, with the exception of the two on the ends - but even these had a very respectable amount of capped cells. Once the bees figured out what I had come for, they were less than cooperative, but patience and fortitude in the face of a very unhappy swarm prevailed, and I made off with four of the eight frames in the Blue Hive's honey super.

I had spent the previous week building a homemade drill-powered extractor, and while it worked beautifully during its test runs with two empty frames, it failed to meet expectations once the heavy, honey-laden frames were clamped in. But we needn't get into that. My design flaws were minor, and with some small modifications, I'm confident that it will work properly for the next harvest. I didn't feel the need to expend any further time or energy to fix the extractor when I had half my crop waiting there already, so instead, I resorted to the "crush & strain" method. It's less efficient and more time-consuming than using an extractor, but I didn't really have much of a choice.

A honey extractor is, essentially, a large centrifuge. Within a stainless steel barrel, an appropriate number of frames are secured to a central vertical rod, which spins them at high speed and forces the honey out of the comb and onto the inner walls of the cylinder. The honey is then allowed to collect at the bottom, and a valve (called a honey gate) is then opened to pour it out. There are several advantages to using an extractor: it's fast and clean, and manages to remove almost every drop of honey from the comb. Furthermore, the comb itself is left intact - though with the cells now empty - which means less wax to strain out, and also saves the bees the time and effort required to build it up again when the frames are restored to the hives. The crush & strain method, on the other hand, is slow and messy, it destroys the comb, and leaves a significant amount of honey unrecovered. However, it's cheap and easy to do, and provides a lot of wax to be collected by the beekeeper, if desired.

So, instead of using my newfangled contraption, I used the age-old method and set to work slicing all the comb off the frames into a strainer atop a 5-gallon bucket. Once I finished removing the comb from the four frames, all there was to do was wait for the honey to drip through, occasionally crushing and stirring the pile of wax in the strainer in an attempt to separate out as much of the sweet stuff as possible. 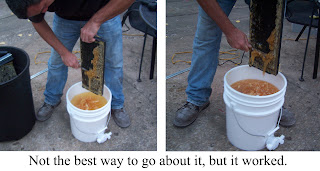 I let the comb sit in the strainer overnight, and disposed of the wax the next morning. A couple of days later, I returned to the hive to remove the remaining four frames, and repeated the process. All told, I ended up with about 2.5 gallons (maybe 30 pounds) of honey from one medium 8-frame super. Not a bad bit of work for a single colony in a single season - and the honey is the best I've ever tasted. I couldn't be prouder of the girls of the Blue Hive. In the spring, I'll replace their super so they can start the process again, and the Yellow Hive, which will then be a year old, will receive a honey super of its own. I should hopefully have the kinks worked out of my extractor by then, and next year's harvest will yield twice as much. 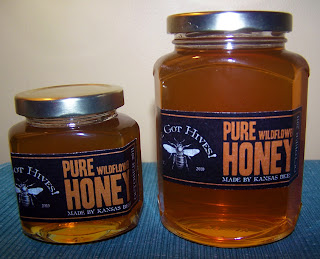 But the saga doesn't end there! Here's a little bonus story for you:

I had planned to return to the apiary the following day to retrieve the remaining four honey frames, but as the morning was cloudy and chilly, I decided not to disturb my bees until the afternoon, when their mood would improve with the weather. In the meantime, I had left the freshly-extracted frames on Ginny's driveway. Sometime before the sun had come out, though, some nearby bees had discovered the frames, still slowly dripping with raw honey ripe for the taking, and had told all their friends. By the time I was aware of this development, the frames were covered with tens of thousands of bees. The air in Ginny's backyard was thick with them, and the sound was intense. It was quite a dramatic scene. There was nothing we could do but wait until dark, when the bees would have returned home with their spoils. I was happy; I felt good about having helped a local, likely wild colony prepare for winter, and my sticky frames got cleaned for free.

It wasn't until that evening, when the bees had left, that we saw the aftermath. There were hundreds still left on the driveway, most of them dead, and the rest staggering around, dying. At first we thought they had gorged themselves to death, but when we investigated, here and there we could see pairs of bees locked in combat - one riding another's back, stinging repeatedly. They had not eaten to bursting. This had been a war between at least two competing colonies. Had this taken place in the summer, the bees may not have fought over the honey, since food is so plentiful, and since both colonies were stealing it - but with the scarcity of available nectar in October, what probably started as a big honeybee party ended up as carnage. It was a sad sight, but now I know that we actually played a small part in helping two (or more) colonies survive the winter, despite their losses, which were minimal compared with the number of foragers that returned safely home with full loads of honey.

But now, a moment of silence for those sacrificed in the Battle of the Driveway.

Thanks for reading. More to come soon.
Posted by Jay at 8:09 PM No comments: