November, 2010 - Winter is on its way, and thanks to some extra-long autumnal weather, we were able to take one more trip out to the hive to check on its progress and estimate the bees' chances of surviving winter before the real cold arrives.

We had a relatively mild summer here in eastern Kansas, and winter seems to be reluctant to show itself (so far), and there was still foraging activity even into early November, amazingly enough. Around mid-November, though, nighttime temperatures dropped below freezing, so that was the end of that. The bees have packed it in for the winter now, turning the page on my first season as a beekeeper. Now begins the waiting game.

As I noted in a recent post, a colony of honeybees, depending on its size, needs about 60 pounds of honey stored in the hive if they hope to survive during the cold months. Foraging is simply out of the question during the winter, since plants are no longer flowering, and even brief exposure to freezing temperatures is fatal to bees.

So the question is, do my bees have enough honey to feed them for the next three months (or more)? The short answer is that I don't know. However, I'm cautiously optimistic. The lower super is likely completely full, and the upper super is about half full. I estimate that the colony has stocked between 50 and 60 lbs. in the hive. Considering that these bees were installed in their home (which was completely empty) on June 1st, their numbers are probably fairly modest: I estimate about 30,000 bees in the colony at the present time, maybe less. If my novice guesswork is accurate, my girls should have enough to last throughout the winter, with even a possible surplus once spring arrives.

The inspection on November 8, my last until the spring, was a cursory one. Upon our arrival, it was obvious that the bees were no longer in foraging mode. The activity around the hive entrance can only be described as "subdued." It appears that without flowers to visit and inventory to stock, the colony is a little lethargic. Or maybe that's the wrong word. Perhaps they're just enjoying the brief downtime before the cold hits us like a ton of frozen bricks. Either way, it was a marked contrast to what we had seen during prior visits: 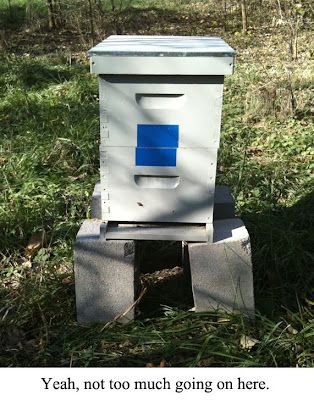 As far as fulfilling my beekeeperly obligations went, I opened the hive, removed some burr comb and propolis joining the frames to the inner cover, and peeked at the frames in the upper super. I didn't pull any frames or inspect the lower super at all. A couple of weeks later I returned to add the entrance reducer, which will help keep out the cold, as well as any critters who might see the hive as a convenient winter hideout. Those are all the steps I'm going to take. From here on out, it's up to the bees. If, sometime in midwinter, there is an anomalous warm day, I'd like to check up on them, and hopefully witness some cleansing flights. In that event, I most likely won't open the hive at all, so as to avoid allowing cold air inside or otherwise disturbing the colony. Winter is stressful enough for them as it is.

What does the spring of 2011 have in store for me and my bees? In a word, honey. Assuming that the colony survives the winter with a surplus, I'm going to add a honey super to the hive as soon as possible. A honey super is like the other supers, but smaller, intended for the collection of honey by a beekeeper rather than that to be used by the bees. The addition of a queen excluder ensures that there will be no eggs or larvae in it - just the sweet stuff.

And I'll be expanding my operation, as well. During the winter I'm going to acquire some new hive equipment and place an order for a new shipment of bees. That's right, I'm completely addicted. You might say I've been bitten by the bee bug. I wouldn't say that, but you might.

So anyway, let's keep our fingers crossed all winter for the little colony that could.
Buzz, baby.
Posted by Jay at 4:59 PM No comments: