September 30 - took a trip out to the hive today, as it's been two months since my last inspection. When we got there, the bees were coming and going from the hive in huge numbers. They know fall is here, and winter's going to come roaring around the corner, and there isn't too much time left for foraging. They're all working overtime to provision themselves for the long, cold months they'll spend cooped up inside with nothing to do. Winter must be a nerve-wracking time for them. 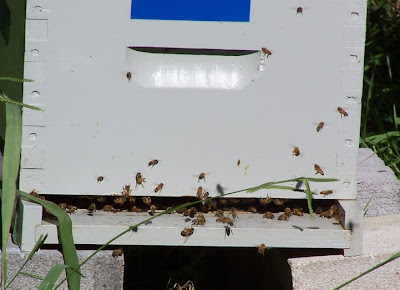 Back in July, There had been some comb built on the central frames in the upper super, but very little - it was more of a light coating of wax than proper comb. I had hoped that by now, the lower super would be full of honey and the bees would have started turning their attention to the uppers, where there were eight empty frames waiting to be filled as well, allowing them to double their storage capacity. 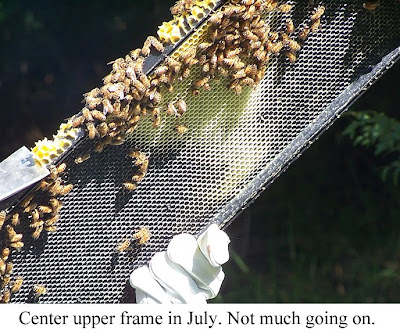 Well, I wasn't disappointed. Even before I removed the center upper frame, the thousands of little faces staring up at me was a testimony to the fact that they had indeed been putting in a lot of hours to get the upper super in shape:

And once I got the center upper frame out (burr comb attaching it to the frame below made it difficult again), I was relieved to find that their progress was actually better than I had expected. There was lots of nectar, pollen and capped brood. The queen is present and laying eggs in the upper chamber, and the workers are preparing it for more.

These girls make me proud. This is what I had hoped for. This means that the lower super is full -- or at least full enough that the bees have begun to focus their efforts on the upper frames -- and that the lower super is now considered by the bees to be almost exclusively "storage." The next time I inspect the hive (in about a month), this frame will more than likely be completely full, and the others around it may look like this one does now.

In case you are wondering why I usually emphasize the center frames in my inspection reports, it's because honeybees work upward from below and outward from the center. In a brand new, empty hive, such as this one was back in May, the bees have the entire space to work on. Being such an organized society, they maximize efficiency by concentrating on the bottom of the center frame, building comb upwards, simultaneously on both sides, to cover the frame. When both sides of the center frame have been filled, they start at the bottoms of the frames on either side of the center, and so on outward toward the walls of the wooden super. Once the downstairs is full of honey, they move upstairs and begin all over again with the bottom of the center frame. When I installed this colony into the empty hive, there was only one super (which is now the lower super), but even if there had been two supers, a lower and an upper, the bees still would have begun working from the bottom of the lower frames first. Therefore, I use the center frames as a yardstick to measure their progress. Once I saw that there was nectar, pollen and brood in the center upper frame, I knew that everything is going well and the surrounding frames will receive their attention soon, and that the lower frames are, for all intents and purposes, full of ripening honey.

If there had not been progress on the upper frames by now, it would have been an indication that something was seriously wrong, and I would have placed their chances of surviving the winter at somewhere around 20-25% without supplemental feeding with syrup. There simply would not have been enough honey to feed the colony, and they would starve once the stores were depleted. Now that they have begun filling the cells in the upper super, though, their chances of survival are increasing, and that's an encouraging thought. One of the rules in beekeeping is to allow your bees about 60 lbs. of honey to get them through the winter, and anything over that is yours to steal. A single frame, when full, holds about 6 pounds of honey. Because I'm using 8-frame equipment (8 frames in the lower and 8 frames in the upper super), the lower super alone, when full, can hold about 48 pounds of honey -- and that's assuming that all 8 frames are completely full. Now that my bees have begun filling the upper frames, they just might hit that 60-pound mark before the freeze. They still have a lot of work to do.
Posted by Jay at 2:12 PM