Among all the frenzied activity in a hive, there are some bees that just don't really do much at all. While the workers are busy cleaning house, foraging for nectar and pollen, guarding the hive, raising young, controlling temperature, collecting water, building comb and attending to the queen, the drones, the males in the colony, live in luxury, without a care in the world. They benefit from their sisters' tireless industry and contribute nothing to the colony on which their survival depends. They eat all they want, sleep when and where they want, and bully the smaller workers. Since a stinger is a modified ovipositor, honeybee drones are stingless, so they can defend neither themselves nor the honey they jealously love and which they did nothing to produce. It's a wonder that their presence is tolerated (though perhaps grudgingly) in such a goal-oriented society at all. 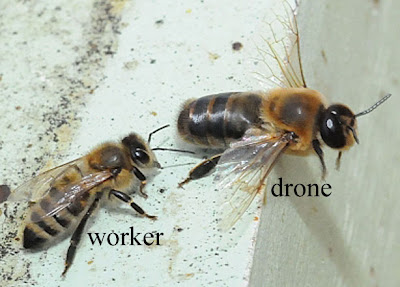 Drones are expected to do only one job in their lives: to mate with a virgin queen. When not availing themselves of the colony's stored food, they spend their lives lazily hanging out with the boys away from the hive in places called drone congregation areas. There they spend hours each day playing poker and shooting pool, and talking about how their women are always nagging them to take out the garbage (or the bee equivalent) as they wait for a queen to fly by. Yes, they've got it tough, those drones.
It's still unknown how drone congregation areas are designated, but they are agreed-upon locations that are known by both the drones and the queens from all the hives in the general vicinity. Because a queen's nuptial flight is fraught with danger, and she risks her life by leaving the safety of the hive to mate (usually only once in her life), it makes sense that there should be a specific place for her to go in order to mate quickly and return to the hive. Congregation areas are also convenient for providing a genetic variety and preventing inbreeding. These areas are usually found in the same place year after year, which raises some interesting questions. How do the drones, who have never been to the congregation area before, know where it is? For that matter, how do the queens know where to find them? What are the criteria for an acceptable location for a congregation? Geographical features such as hills and valleys or water sources? And for that matter, what if the criteria are not met some year? Is there an alternative system for designating one? For now, these are among the secrets that the bees see fit to keep from us.

When the weather is good and a virgin queen takes off from her hive on her nuptial flight, she will fly to a local drone congregation area, exuding pheromones and flashing her best come-hither looks. The drones will fly after her and chase her down, mating with her while in flight. The mating itself takes place at relatively high altitude, out of sight of observers on the ground, and so is rarely witnessed by beekeepers. Unlike many other species, there is no competition between drones for the opportunity to mate with the queen - no battles to the death or chasing each other off, with the victor earning the right to mate. There are two main reasons for this: firstly, since drones don't have stingers, they lack the necessary evolutionary weapons for such battles, and secondly, because the queen flies through the area and does not stop, any drones who engaged in such contests would simply find the queen gone after taking the time to vanquish their rivals. So the drones who can fly fast enough to catch up to the queen get to mate with her, thus achieving their purpose in life. But here's where cruel irony steps in: the act of mating itself is fatal to the drones. Upon the release of sperm, the drone's reproductive organ (the endophallus) tears off, along with part of his abdomen, and remains attached to the queen, forming a plug that prevents the loss of sperm after copulation. (This is known as eversion, and it's said that there is actually an audible pop when the endophallus breaks off.) The mortally-wounded drone then falls to the ground and dies soon after. This plug also provides visible evidence of her successful mating flight, to be removed by the workers, when she returns to the hive.

Maybe it's because of this agonizing sexual suicide that the workers in a colony tolerate the presence of the boorish drones who treat them so cavalierly. It's possible that the girls feel some measure of pity for them. If that is the case, though, that pity and tolerance doesn't last. When the weather becomes colder and the colony prepares for winter, the workers turn on their brothers and physically eject them from the hive. Since mating season is over and the drones have big appetites, they are forced out in order to conserve the winter stores. Some drones will attempt to re-enter the hive and are killed. Others are resigned to their fate and remain close to the entrance, where they succumb to the cold or to starvation. It's tragic, in a way: these are the drones that were not fast enough fliers to earn the right to mate with a queen and die, and it almost seems to be a punishment for their physical shortcomings and inability to pass on their genes. If their life's purpose is not served during the warm season, then their contract with the colony, their own family, is voided and they are replaced in the spring.

Here's one last bit of information about drones that I find worth mentioning. Because the female workers are produced from fertilized (diploid) eggs and the male drones from unfertilized (haploid) eggs, honeybee drones do not have fathers. Their nearest male relative is a grandfather on their mother's side. Interesting stuff, no?

See you again soon. Maybe you should give your brother a call. Or better yet, why not send him a t-shirt?