Winter is a boring time to be a beekeeper, I've discovered. It's nothing more than a four-month waiting game, and I'm happy it's over. And I'm sure that if I could ask them, my bees would agree with me. I had gone out to the hive a couple of times during the winter, on warmish days, to check on the colony and make sure there were no signs of catastrophe. These visits were very cursory, and I had very little to report, other than the hive was still standing and still inhabited. I did find some dead bees around the hive, though, and some even as far as thirty feet away, frozen on the snow. These casualties were most likely the result of cleansing flights that took too long, or maybe cabin fever. Bees become restless when there's nothing to do, and some may actually have taken flight in a desperate attempt to forage, despite the freezing temperatures and complete lack of flowers, like a shipwreck survivor swimming away from a tiny island because he could swear he sees a ship on the horizon. These fifty or so deaths didn't concern me, though, as a loss of fifty out of 30,000 is a good winter. 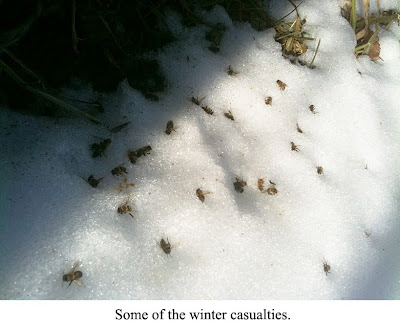 But spring has sprung now, and the plants are budding. Vinland Valley Nursery, right next door to my bee yard, is open for business again, and that means so is my hive. And for Christmas, Ginny bought me a new bee house, and on April 7, I received a new package of bees in the mail. I had been looking forward all winter to starting up a second hive, and the time had finally come. After a day at work that seemed longer than usual, I piled the newly painted hive and the shipping container of bees in my car and raced out to the site. It was also the day I could add a honey super to the existing hive. Finally, I can start collecting rent from my tenants! 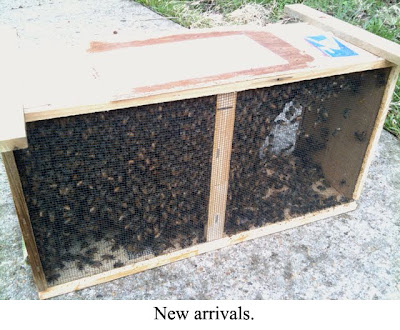 When I got there, I saw that foraging was in full swing. The old hive was, if you'll excuse the expression, abuzz with activity. Foragers were set to their tasks with renewed energy, and younger bees were taking their orientation flights around the hive. It was as though winter had never happened. I decided to add the honey super to the old hive before setting up the new one. However, I made a couple of amateurish mistakes that day, which made that particular objective impossible. Firstly, I had neglected to take a shower after work, so I was sweaty and likely a bit more pungent than the bees were used to. Beekeeping manuals suggest a shower before interacting with bees, because any attempt to open (or even to approach) the hive is regarded as an invasion. Since bees have such a powerful sense of smell, a sweaty invader is even worse than a pleasant- or neutral-smelling one, and it also allows them to locate you more precisely. The second mistake that I made was to forget to bring my smoker. To be fair, I knew they were mistakes as I made them, but I continued anyway, partly due to impatience on my part (I had already gotten there, after all), and partly in a "what's the worst that could happen?" spirit of discovery. Perhaps you can guess where this is heading.

I suited up and lifted the cover off the hive. The bees inside were immediately annoyed by my presence, and the volume of their buzzing increased tremendously. As I began to pry off the inner cover, however, they declared war. Within half a second, there were dozens of bees flying directly at my face - and not in the inquisitive way that I was used to. I knew that opening the hive without smoking was sure to trigger an alarm, but I was under the impression that I could get the cover off, slip the queen excluder and the honey super on, and close the hive again in a relatively short amount of time. The fact is, I was completely unprepared, psychologically, for the bees' reaction. I was wearing my bee jacket and gloves, of course, but the sight and sound of so vicious a defense threw me into a near panic. I was forced to retreat several times, and each new move I made toward the hive again sent a new wave of defenders speeding toward my head. And I hadn't even gotten the inner cover off!

When I felt a tiny "zap" on my hand, I felt I was beaten. I retreated farther away, a good 25 feet, to allow the bees to calm down again. The new plan was to regroup and approach the hive one last time - this time to just replace the outer cover on and leave them alone until I could return with the smoker. As I was removing the stinger from the leather glove, I felt something else, a soft tickle on my stomach, under my bee jacket and under my shirt. I don't think I have ever removed an article of clothing so quickly in my life. Sure enough, one of the defenders had managed to defeat my armor and was crawling on my bare stomach. Thankfully, though, it was one that had already stung my clothes somewhere else, and was harmless. I brushed her off and caught my breath for about a minute before putting the bee jacket back on (after carefully checking the inside for others, of course). I then summoned some courage and walked through the thick cloud of very angry bees to replace the roof of their home.

The sting that I had felt through the glove was surprising, but it did not actually penetrate my skin. I'm certain that I was stung many times during those ten minutes or so, but the protective gear did its job. Next time, I think I'll let the smoker do its job too.

I next turned my attention to hiving the new colony. The best spot I could find, as far as level ground was concerned, was about two feet away from the original hive. I decided to work fast. When hiving a new colony, a smoker is not necessary, as the bees in the shipping container don't have a home to defend. They're tired, hungry and confused after their ordeal, but they aren't aggressive. So I got the new hive body set up on its cinderblocks, removed a couple of frames, set the queen cage inside, and poured the approximately 10,000 bees in. The next step was to set the feeder on top and fill it, and finally to place the cover on top. Everything went smoothly, and I set the shipping container in front of the entrance so the remaining bees could find their own way to their sisters. When everything was done, I gave both hives their space and observed the activity from a safe distance. As I watched, the aggressiveness of the original hive subsided and turned into curiosity before my eyes. The colony was clearly investigating its new neighbors while the new arrivals oriented themselves to their surroundings. 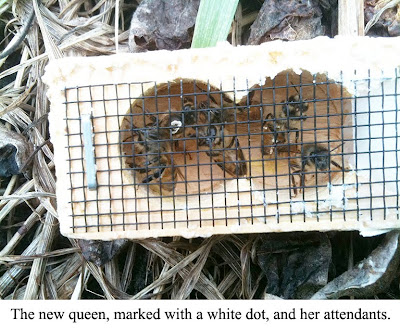 ...And then there were two. I now have a proper apiary, rather than just a hive, and I will return next week to check on the newbies' (see what I did there?) progress. The first hive will also receive a honey super, whether they like it or not. And they really will like it, they just don't know it yet. Moreover, I will enter a new dimension in my experience as a beekeeper: the management of two hives, and the collection of honey. The hives also have names now, according to the colored squares I painted on the front: last year's hive is the Blue hive, and the new one is the Yellow hive (despite its base color being a light blue). Seeing the two situated next to each other is a beautiful sight, and I couldn't be happier. I'll have more to share in the coming weeks and months of this new season, so stay tuned. 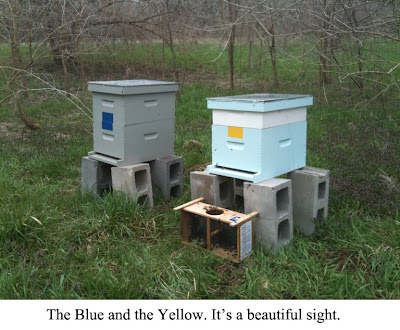