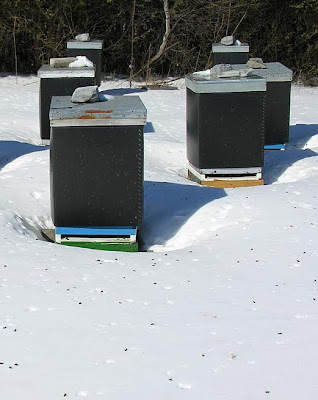 My girls should be arriving within the next few days, according to the apiary I ordered them from. They couldn't give me an exact shipping date, but it should be very soon.

Live honeybees are shipped through the postal service, usually as a package of 3 pounds of bees with one queen. That's about ten thousand bees, enough to start a colony if hived early enough.

Because of unusually bad winter weather (remember how even the deep south got some snow?), the commercial queen-breeding apiaries in the U.S., most of which are in the southeast, are behind schedule for queen production, and so the bees are being shipped out in May, instead of in March or April. So my first colony will likewise be at least a month behind schedule, and will have to work hard to catch up and prepare for a potentially deadly Kansas winter. If the bees haven't stored enough honey to feed the colony during the winter months, the results could be disastrous.

It's a common misconception that honeybees hibernate in the winter. Not so, sir! They remain awake, as busy as ever, vibrating their wing muscles and clustering in one giant mass around the queen, whose survival is essential. The bees in the cluster spend all winter working their way in toward the center of the mass, and the entire cluster itself moves slowly around the hive as it clings to the comb, feeding on the stores of honey collected during the spring and summer.

Winter clustering begins once the outside temperature reaches about 54 degrees Fahrenheit, and the bees' "shivering" and shared body heat in the tightly compact mass keeps the temperature within the hive in the 80s, even during the coldest months. Individual bees will sometimes, though very infrequently, leave the protection of the winter cluster to engage in "cleansing flights," during which they will fly a short distance from the hive entrance in order to relieve themselves. These cleansing flights only last a few seconds, though, because subfreezing temperatures can kill a single bee very quickly. The picture above shows some unfortunate bees who succumbed to the cold before they could return to the hive during such flights. The hives in the picture have been wrapped in sheets of black insulation paper.

Once the weather becomes warmer again, the bees explode from the hive, performing their simultaneous (and, I can only imagine, incredibly satisfying) cleansing flights in huge numbers. The colony has survived, becomes active again, and begins another season of honey production in preparation for the next winter.


Countdown to Hiving: Check back for updates soon, as I'll be sharing lots of pictures and video when my bees arrive!
Posted by Jay at 12:22 PM