Second-Story Inspection, or "What Dem Bees Up To?"

It's been over a month, so it was time to brave the hot, hot Kansas summer and check on the girls again. And I was happy to get back in the field. 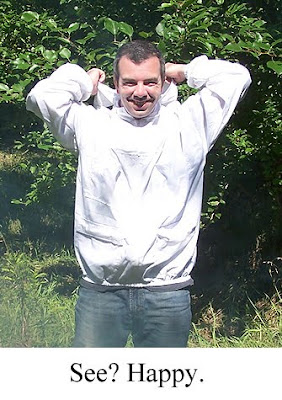 I had added a second super in June, and I wanted to see some progress on it.
It was not to be. Some of the more forward-thinking bees have begun to build some comb on the upper frames, but not much. Downstairs is still where the action is. 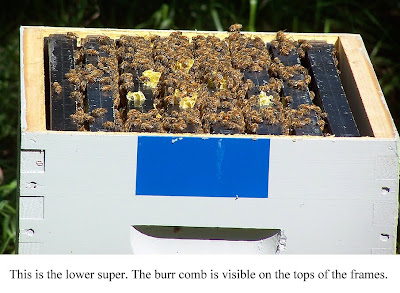 Instead, the bees were more intent on sealing the frames together by adding burr comb as a bridge between the upper and lower frames. Burr comb is, from the point of view of the ever-efficient bees, a remedy for the otherwise empty, usable space between the top and bottom supers. From the point of view of the beekeeper, it's just a nuisance. Because of the natural strength of dried and hardened wax, burr comb makes it difficult to slide an upper frame out when it's been glued to the frame beneath it. To put the strength of wax in perspective, I estimate that the center lower frame, where most of the brood and honey is being stored, currently weighs about six to eight pounds. When I tried to remove the center upper frame directly above it (which was empty of brood and honey and therefore weighed only a few ounces), the burr comb attaching the two frames caused the lower frame to pull out along with it. A thin strip of burr comb, only about half an inch thick, was able to lift eight pounds without breaking. And so begins an eternal dance between bee and beekeeper: they will continue to build burr comb and I will have to continue to cut it away. But I'm adding to my wax collection with each inspection. Perhaps I'll have a future as a chandler. I've made one ugly, lumpy, sad-looking little candle with my bees' wax so far, and while not much to look at, it did burn beautifully - and it smelled nice too.

Another delightful substance produced by bees, and also used for sealing cracks and spaces in the hive, is propolis, which is often affectionately referred to as "bee glue." Propolis is a viscous paste collected from tree buds, and is another of beekeeping's pleasant little annoyances. When soft, propolis is gooey, yellow and very sticky. If it gets on fibers such as clothes, it's there forever. When it hardens, propolis is similar to cement and becomes notoriously difficult to remove. My bees have decided to begin the process of sealing the inner cover to the upper super with propolis. From here on out, much of my inspections will be spent scraping at propolis and burr comb. 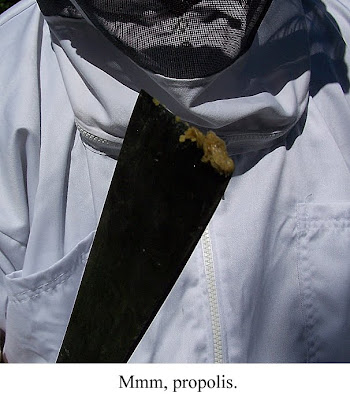 I had hoped to be able to collect some honey from my bees in the fall, but it looks like that's not going to be possible this year. Because the hive was brand new and was started so late in the season, the bees have had to work hard to get where they are now. They've got a very nice colony going, but the honey they collect is going to have to last them through the winter. There won't be any surplus for me to steal from them. The foraging season will only be a couple of months longer. Next year will be a different story, though. As long as the colony survives this winter on what they have, they will get a good head start on the spring, and there will be more honey than they, or I, could possibly ever use. And won't that be sweet?