So, yeah.
I have some good news, and some weird news:

The good news is that when I returned to the hive yesterday, I found a queen! Hooray!

I was checking to see if the queen cells that I found last week were empty, and in doing so, she made her appearance as though nothing had happened. "Oh, hey, Jay. How's things? Just laying some eggs, you know. What's new?" Didn't she know that I had been worried sick?

So I may have been a bit hasty in my previous determination that she had died. I swear that I checked every bit of comb for her, and she wasn't there. I swear. It's possible that she was out of view on the bottom board, though that would have been unusual. Did she leave the hive and return? Also unusual. Either I have a crazy queen, or possibly, just possibly, I'm new at this.
I vote crazy queen. Needless to say, I was both relieved and confused. If there had been a queen all along, why did the workers decide to construct emergency queen-rearing cells? Upon closer investigation, it seems likely that the queen cells may have actually been clusters of drone cells, stacked very close together. Because drones are larger than workers, cells containing drone brood are larger than those containing worker brood, and appear as lumps among the otherwise flat landscape of capped comb containing pupal workers. Queen cells are likewise larger than drone cells.
One of my two tentative theories is that my queen had planted drone eggs in three or four adjacent cells, and, once capped by the workers, they appeared to my novice eyes as one large capped cell, which, judging by its size, could only house a queen. This, compounded with the fact that I couldn't find the queen, led me to the conclusion that my queen had died and the workers were taking steps to replace her. If these were actually drone cells, I won't be making that mistake again.

However, there is another possibility, though more remote. The queen may have actually left the hive to mate a second time. This happens if her first mating flight was not as successful as she would have liked. Usually, queens will take only one nuptial flight, mating with several drones in succession, and returning to the hive with her spermatheca full. The spermatheca is the organ in which the queen stores sperm, releasing it to fertilize only those eggs that will produce workers. Unfertilized eggs produce drones, and the queen decides which eggs will be fertilized and which won't. She knows what she's doing. A full spermatheca from a single mating flight can last a lifetime of egg-laying, up to 5 years.
But if the amount of sperm stored in her spermatheca from her first nuptial flight was running low due to a small number of drones encountered, she may have taken a second flight to replenish it. This occurrence is uncommon, but it can happen, especially if the queen has been artificially inseminated by the apiary in which she was raised. (Yes, bees can be artificially inseminated, and it's done to ensure that the apiary is selling "mated" queens.)
If she did leave the hive to mate again, the workers, having discovered her absence, would have immediately begun to prepare her successor in the event that she didn't return. So I may have correctly identified queen cells after all. Upon her return, having successfully mated, the queen would have torn open the new queen cells and killed the young queens inside. During this latest inspection, I noticed that the "queen cells" that I saw last time were still capped, but much smaller. This could indicate that they were indeed queen cells, and that the queen returned and dispatched the pretenders within, and the workers then patched the comb where the queen had damaged it.

The first theory is probably more likely, but the second is not outside the realm of probability. I can't be certain what actually happened, but either way, it really doesn't matter.

So, all in all, a good visit. My queen, "Steve," is still present and doing her job.*
I also noted that many of the capped cells that I saw last week are now empty, meaning that the young bees within have since emerged. The colony's population is increasing.
Having removed the entrance reducer, the guard bees are now visible, and the foragers are coming and going much more freely. (The entrance reducer is a wooden dowel with a 1-inch space cut out of it, blocking most of the entrance and making it easier for small colonies to guard. Now that their numbers are growing, I decided that it was time to allow them unrestricted access to and from the hive, which will improve the foragers' productivity. The entrance reducer can clearly be seen in pictures from previous posts.)
The second brood chamber that I added to the top of the hive is mostly empty, though some workers have begun building wax on the frames within. The vast majority are still concentrating on the frames in the lower super, which is still not full. 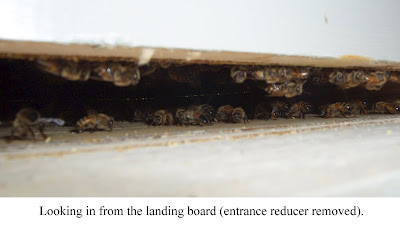 My inspection visits will now be less frequent. I'm going to let my girls do their thing undisturbed for a while. My next visit will probably be in mid-July. By that time, I expect to see many more bees, comb drawn out in the upper super, much more pollen and brood, and lots of capped honey. I'll still keep a-bloggin', though, so don't change that channel.