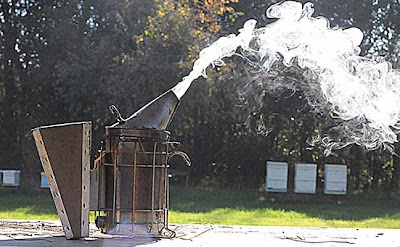 One of the most frequently-asked questions about beekeeping is "what's the deal with that smoke thing?"

Well, simmer down, and I'll tell you. The smoker is an essential part of the beekeeper's toolbox. When working a hive, it's necessary to do as much as possible to make the process as easy for the bees as it is for the beekeeper. Bees don't much like it when someone decides to poke around in their business. They've got brood and a queen to protect, not to mention their home itself and the final product of their labor: all that sweet, sweet liquid gold. When a hive is opened, the bees will instantly attack en masse, resulting in a bad day for the intruder, and a lot of dead bees. But if the bees are distracted, the hive can be opened for inspection or honey removal much more safely.

For millions of years, bees have made their homes in trees. Before they became beekeepers, ancient humans were honey hunters, climbing trees or cliffsides with rickety rope ladders in order to raid a hive and collect the honey -- a practice that still exists today in some parts of the world, most notably in Nepal. It was discovered thousands of years ago that smoke will "calm" the bees, making them much less likely to become aggressive toward an invader.

Bees aren't stupid, and they know that they can't defend against fire. Instead, when they smell smoke, rather than becoming enraged at a possible threat, they quickly retreat into the hive and begin sucking up as much honey as they can in preparation to abandon the hive for another, more preferable location, i.e., one that isn't on fire. This contingency plan is deeply ingrained in their behavior. So in effect, the bees aren't "calm," they are actually engaged in a vigorous act of coordinated self-preservation in the face of a catastrophic emergency, and they become much too occupied with the relocation of their colony and their food stores to worry about who else might be in the area. Since the "emergency" passes quickly when a beekeeper smokes his hive, the bees do not actually leave, and the honey is replaced in the cells of the comb. (Another benefit of this behavior, as far as the beekeeper is concerned, is that when the bees gorge themselves on honey, whether in the case of a fire or when about to swarm, their abdomens become distended, making it difficult to flex the appropriate muscles required for stinging.)

Honeybees have a highly-developed sense of smell. A significant part of their communication relies on pheromones, and because their food derives exclusively from flowering plants, they use scents as landmarks and navigational tools. A healthy colony always posts guards at the entrance of their hive, to keep watch for intruders, whether it be a predator, a bee from another colony trying to rob them, or a human or animal that wants to get at their honey. If a threat is detected, guard bees will release a pheromone that incites the bees within the hive to attack. It's also believed that smoke will mask the scent of this pheromone, so that when the guards attempt to rally the colony in defense, their sisters are unable to smell it, and therefore oblivious to the intruder's presence (or, at the very least, to the release of the guards' pheromones).

For these reasons, the smoker is the single most important piece of equipment available to beekeepers, and they have been in use in some form or another for millennia, since at least ancient Egypt, and probably earlier. Not only does it protect the beekeeper from stings, but it also protects the bees by preventing a sudden decrease in their numbers by an act of mass suicide in their own defense. 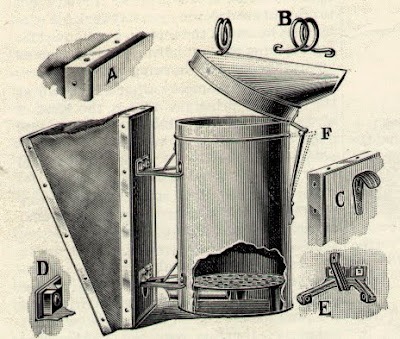 Smokers are very simple and effective in their design: a cylindrical chamber contains the burning fuel and is topped by a hinged lid with a cone-shaped spout with a hole, to channel and direct the smoke for easy application. A pair of bellows that doubles as a handle blows puffs of air through the fuel and out the spout. The fuel itself can be anything that burns, but to avoid harming the bees, a cool smoke is far preferable to smoke which is hot. Pine needles, burlap, hemp twine or sisal are excellent combustibles that burn slowly and produce a thick, cool smoke.

I'll be inspecting the hive in a couple of days, to make sure the bees are hard at work building their new home. Check back soon to see the smoker in action.
Posted by Jay at 11:14 AM