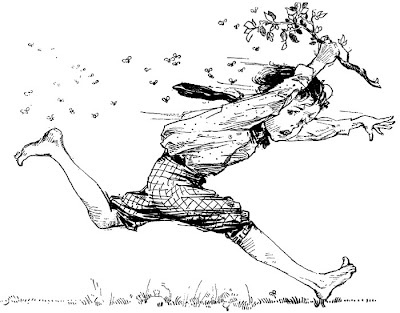 Sooner or later, if you're spending time with bees, you're going to get stung. In my case, it happened sooner.

Bees don't "bite," but they do sting. The stinger, arguably the most famous feature of members of the order Hymenoptera (which includes bees, wasps and hornets), is located at the tip of the abdomen, and is believed to be a modified ovipositor, the organ responsible for depositing eggs. In the case of worker honeybees, which (except under very unusual circumstances) do not lay eggs, the stinger is a pair of hollow, barbed spears through which the bees' venom (apitoxin) is pumped into the wound from a gland in her abdomen. The stinger, in conjunction with a large population of honeybees in a colony, makes for a very effective defense. Queens have stingers as well, but use them only against other queens, in their dramatic battles for supremacy of the hive. The drones, the males of a colony, do not have stingers at all. 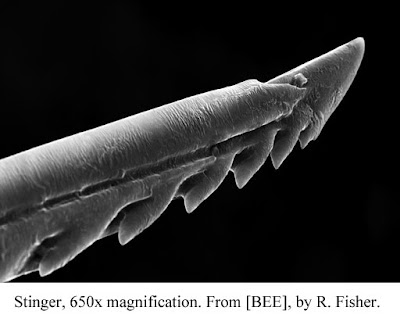 It's well-known that once a honeybee stings, she dies. The reason for this is that because her stinger is barbed, it becomes lodged in the thick skin of humans and animals, making it impossible for her to pull back out. Instead, in trying to do so, she tears away part of her own abdomen and leaves the stinger, along with the still-pumping venom gland, behind. She then flies off and dies within a few minutes. However, if a honeybee stings another insect, such as another bee or a hornet attempting to invade her hive, she can sting repeatedly, without sacrificing herself in the process. Their stingers have adapted primarily for defense against other insects, and from a certain point of view, still have some catching up to do in order to be a non-suicidal defense mechanism against mammals. Wasps and hornets, on the other hand, are more fortunate, in the sense that their stingers are smooth rather than barbed, and so can sting an animal's skin with impunity, and as often as it chooses. This, along with the fact that wasps and especially hornets are much more aggressive than honeybees, makes them as dangerous (or even more so) than honeybees, even though they lack the bees' sheer numbers. There are basically two types of reactions to a bee sting in humans, depending on the severity of the sting and an individual's resistance to the venom. The most common, a local reaction, is the initial pain, followed by swelling and itching that lasts for a few hours. Another common reaction is called a "large local reaction," in which the swelling, redness and itching in the immediate area of the sting can last for about a week (as in my own experience). This is not indicative of an allergy, it's just a case of the symptoms lasting a few days longer. Local reactions are suffered by the vast majority of people.
The more serious type, in people who are allergic to bee venom, is a systemic reaction, which affects the entire body and can be very serious and potentially life-threatening. Allergy to apitoxin is rare, occurring in less than 3% of Americans.
The symptoms of a systemic reaction are generalized itching, hives and swelling (not only in the area around the sting site), fever, nausea, difficulty breathing, and in extreme cases, anaphylaxis (also called anaphylactic shock), which can include all of the above symptoms, plus rapid pulse, wheezing, abdominal pain, slurred speech, confusion, and even cardiac arrest, respiratory arrest, and renal failure. Symptoms of a systemic or allergic reaction can appear within minutes to hours after a sting, but can be treated effectively in a hospital with epinephrine, antihistamines and corticosteroids, among other procedures.

Thankfully, anaphylaxis occurs in less than 1% of bee stings. But if you know you're allergic to bee venom and are stung, or develop shortness of breath, dizziness, nausea, or swelling in other areas, you should call 911 or get to an emergency room immediately. It's important to note that if you're unlucky enough to suffer many stings from an angry hive, you may experience more serious, even systemic symptoms, even if you're not allergic -- due to the large amount of apitoxin in your body from multiple stings. If this happens, seek medical attention as soon as possible.
...And it goes without saying that if you have an allergy to bee stings, or have experienced systemic reactions in the past, beekeeping may not be for you.

The first thing to do if you've been stung by a honeybee is to remove the stinger. You'll see the stinger, looking like a tiny thorn, sticking out from your skin, with the venom gland at the top. The longer you leave it there, the more venom will be pumped in, and the deeper the stinger itself will work its way into your skin.

In order to avoid squeezing more venom into the wound, DO NOT pinch the stinger or use tweezers to remove it, as you would a splinter. Instead, scrape it out with a fingernail, credit card, or knife edge -- or better yet, a quick, sharp, sideways flick with your finger should work.

It's been shown that increasing your zinc intake can actually prevent insect stings, possibly by altering body odor. If bees, wasps or hornets seem to like stinging you more than others, try 60mg a day.

If you're allergic, it's not a bad idea to keep some epinephrine (adrenaline) around, especially if you engage in a lot of outdoor activities such as camping, hiking, etc. or if you live in an area where there are a lot of bees and wasps. Epinephrine helps to slow and reduce systemic effects by constricting blood vessels, and is available in an autoinjector delivery system under the brand names EpiPen and Twinject, among others. And always get to a hospital as soon as possible.

Remember, bees don't want to sting, except in defense of their home. Don't bother them and they won't bother you.
Now go outside and play.
Posted by Jay at 10:47 AM